CCM– Contemporary Christian Music. It has been a subject of much controversy. Millennials love it and claim it is an effective worship-tool; older generations despise for breaking with tradition. CCM is a question– but not merely of “right” or “wrong.” It is a matter of what is and is not Biblical. It is a matter of principle, not of preference.

I am going a to make a bold, distinct statement that might send some of  you running. But please, hear me out! Stay and read through, and determine before you proceed that you will have an open mind and a heart that is tender to God’s Word.

God is NOT pleased with CCM. Not at all; not even a little. Today I want to look at two reasons why this is so.

Remember Isaiah’s testimony? It’s found in Isaiah 6. In this account, the prophet Isaiah had a life-changing vision. Seraphim, a type of angel with six wings, flew around the throne of God. But they didn’t dance before Him, they did not shout and cheer… they covered their faces and their feet, and cried “Holy, holy, holy is the LORD of hosts!” And in His presence, Isaiah saw Himself for who he truly was– a sinful man. This is only one account that describes our holy, perfect, glorious God. He commands fear and respect in our worship.

Do you imagine that the angels surround His throne wearing skinny jeans and playing a trap set? I can’t picture it either. But this is what CCM does! It attempts to have a jam session that replicates the sounds of the world and treats Him like a man. But He is NOT a man!

“These things hast thou done, and I kept silence; thou thoughtest that I was altogether such an one as thyself: but I will reprove thee, and set them in order before thine eyes.”–Psalms 50:21

Does this photo, in all honesty, seem it represent anything even remotely holy? It claims to… it’s the band For KING & Country. 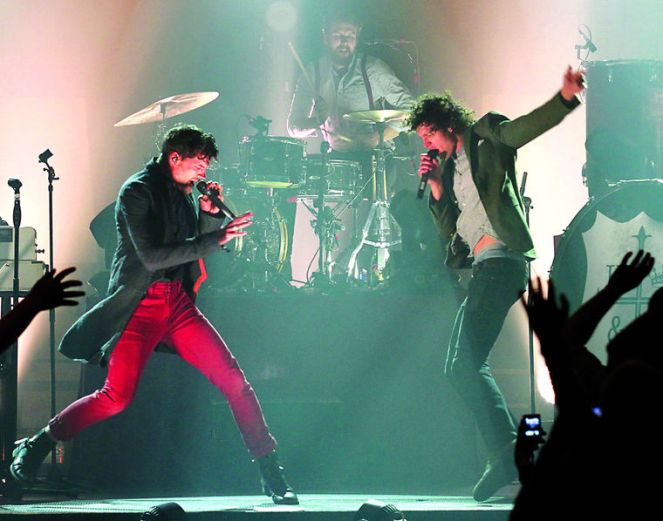 Reason #2: CCM violates God’s command to not be conformed to this world as seen in Romans 12:2.

“And be not conformed to this world:but be ye transformed by the renewing of your mind, that ye may prove what is that good, and acceptable, and perfect, will of God.” — Romans 12:2

We are to be separated, and CCM is not separated. It sounds like the world, and feels like the world, and if you could only hear the back beat and none of the lyrics, you would think it was modern-day rock. The same music (let’s forget about lyrics for a moment) that is used in rock concerts that brazenly endorse Satanism are being used to “worship” our holy God. And it is wrong! God tells us over and over in His Word that we are to be separate. His children should not be mistaken for the children of the devil. Adding clean lyrics does not sanitize the music that is used;  it is still tainted by this world.

Some have used the argument that CCM musicians are only artists, and should be free to express themselves and worship God in whatever way they desire. It sounds good… but God has a specific way He wants to be worshiped. Think back to Genesis 4, the story of Cain and Abel. The two brothers brought God an offering. Abel brought God a slain lamb, a blood-sacrifice, just as God had demonstrated. Cain, a farmer, brought the best of his crops. The result: God accepted Abel’s sacrifice and rejected Cain’s. Why? Because Cain decided to worship God his own way, and not the way God had prescribed.

“And ye shall be holy unto me: for I the LORD am holy, and have severed you from other people, that ye should be mine.” –Leviticus 20:26

“And Samuel said, Hath the Lord as great delight in burnt offerings and sacrifices, as in obeying the voice of the Lord? Behold, to obey is better than sacrifice, and to hearken than the fat of rams.”– I Samuel 15:22

God would rather we obey Him in all things than to give Him the best of something He despises.

Treat God as He is to be treated- in holiness; and be the separation from the world that He wants you to be! He chose us to be in the world, but not of it (John 15:18)!

3 thoughts on “Principle, Not Preference: Why CCM is Wrong”

Hello! My name is Paige, and I'm the writer behind this women's devotional blog. I love feedback, and will do my best to respond to your comments! This blog is for the Lord's glory and honor, so I ask that you refrain from profanity and innuendo. For more info, see "About me." Thanks!

Join 97 other subscribers
Follow His Beloved's Desert Place on WordPress.com

Homeschooling On A Homestead

The Mommiest Introvert
Barren to Beautiful

Finding the beauty of God through the barren soul